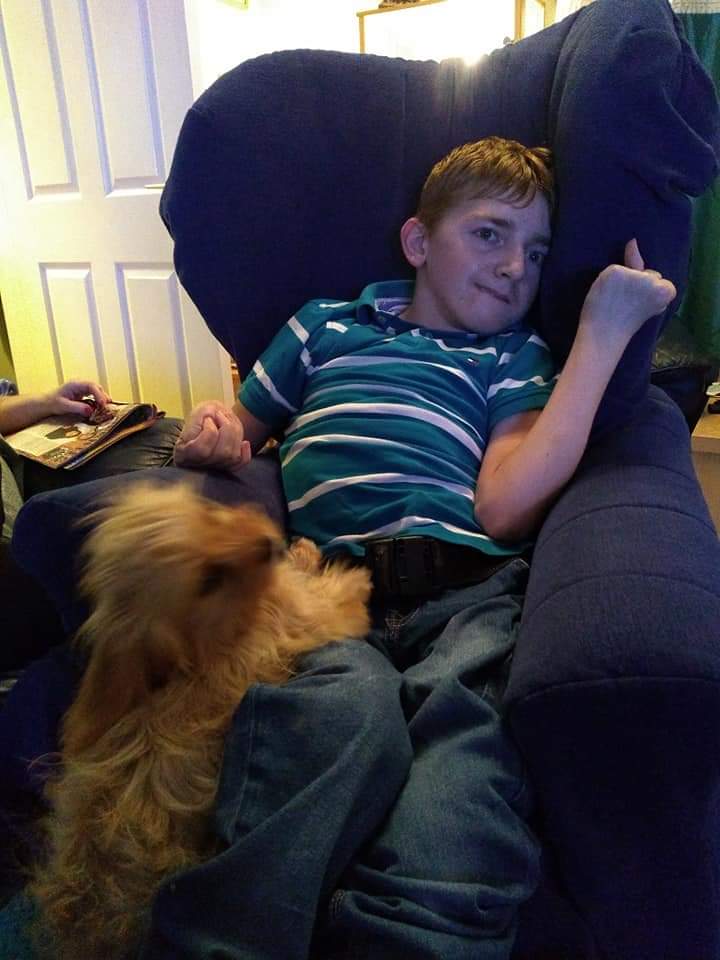 “Here is our family Mito story. When I was pregnant with my middle child, Robert, my ‘Mum instinct’ was shouting out loud to me. For some reason, I knew there was something wrong. I couldn’t explain it, but I just knew. All scans and antenatal tests were fine. Robert was born 11 days early- he was pronounced healthy and fine. He was gorgeous, with big blue eyes. But still my instinct was screaming ‘there’s something wrong’. He didn’t grip anyone’s finger tightly. I tried to breast feed, but it took ages and he didn’t seem to get enough. Feeling a failure, I topped him up with bottles. Now, looking back, we don’t think he had a very good sucking ability. I always felt I would lose him.

The months went on and Robert wasn’t reaching his milestones. Every week I went to the clinic to get him weighed. Each week I told them I thought there was a problem- he didn’t seem to be very strong, he was floppy and not meeting milestones. One old b*%&h of a health visitor was really off with me each time and told me to ‘stop being silly’. At Robert’s 9 month check-up, he still wasn’t sitting up unaided, old b health visitor was there. ‘Sit him up, dear!’ she loudly shouted at me. ‘He can’t sit up’, I explained. ‘Why, what’s wrong with you, he’s your second child, don’t you know how to be a mother by now?’ the old b said. ‘You tell me’, I explained ‘I have brought my boy here every week and you have always told me there is no problem’. I said this through gritted teeth with tears in my eyes.

He was then referred to a child development centre. At last I thought we are getting somewhere. Along we went. It was a nice place. The other moms were great and we all swapped our news. It felt great to be with parents who got it. From there he was referred to Birmingham Children’s Hospital and at 18 months, we were informed he had cerebral palsy. I remember crying at that news- if only it was that.

Robert stated at a school for children with special needs at 2.5 years. By this time he had got more mobile and he could walk with support and would climb over everything- he was very daring. He started doing really well… but at the age of 3 he started seizures and then he started going downhill. He was really sleepy, kept falling over, was wobbly and his right eye started to roll. He ended up in A&E a few times after falling and banging his head. He ended up with a helmet to keep him safe. He had a very cheeky, happy personality. His friends nickname for him was ‘Smiler’. We called him ‘Roberto’ when he was being cheeky. He got called it a lot.

We went on a family seaside holiday and he loved the beach. We planned our wedding. His face when he saw me try my wedding dress on! He became the biggest poser ever. He loved dressing up. He was 3-4 and told me what he was wearing. He was mainly non-verbal, but one of the few words he could say was ‘shirt’. He also called his Nan- my Mom- ‘Jean’ because that’s what Grandad called her and he thought it was funny. We got married in the September 1999 when Robert was 4. He loved being pageboy.

In the January, my Mum started to get breathless and was in and out of hospital. On Robert’s 4th Birthday- March 31st 2000- she was diagnosed with lung cancer. She passed away 11th July 2000, aged 56. During the summer holidays Robert started sleeping loads, I had to wake him up. This was a young man who used to wake up at 6am. He kept getting every bug or virus going and his seizures got worse. We seemed to spend our time between doctors and A&E. He kept getting a rash, like a blood rash. Doctors started doing tests and he had an MRI.

One morning, a doctor called and told me he thought Robert had a Mitochondrial condition. He then put the phone down. He was a wonderfully clever doctor, but we think he had Asperger’s- he was like a mad professor. We didn’t have a computer then, so I asked a friend to look it up. She said ‘none of them are very good outcomes, it’s best to wait until you know for sure’. He picked up again and I tried to put the worry’s out of my mind, I had just discovered I was pregnant after months of trying. All 3 of my boys took at least 6 months of trying. Not much time, I know, but it was a worry at the time. I always wanted 4 children. In my mind I planned 3 boys and a girl.

On October 28th, Robert woke up pointing to his throat, he was pouring with sweat and wasn’t well. My Dad looked after James, our eldest, and we rushed Robert to our local hospital. At first, they thought he was OK and then they checked him again. All hell broke loose- emergency care, the lot. He was ventilated and taken to Intensive care. They later transferred him to Birmingham Children’s Hospital. They thought he had meningitis at first. His doctor came- in fact loads of doctors came, day by day. He had muscle biopsies and tests for everything.

At first, he was getting better- they even talked about him coming home. But then he would go downhill again. He was ventilated 9 times altogether. One doctor told us to let him go after the fourth time. We didn’t even know what was going on then- we were clueless and so were the doctors. Christmas started getting close as his doctor and some others suggested he could have ‘Leigh’s’. The name sounded nice, we thought! It wasn’t a horrible word like ‘cancer’. But then I went to read up on it. I was shocked, tearful and upset. We knew then our boy wasn’t going to make it. But we didn’t know how long we had. ‘Please let us have another Christmas.’

We had meetings. Some doctors wanted us to let him go, but we weren’t ready. When the hell would we be ready!? How can you ever be ready!? One doctor looked at us and said, ‘You do know Robert is dying?’ Ever felt like hitting someone? This meeting was after Robert had been ventilated 8 times. We discussed it together- Rob and myself -and decided we would know when. We tried one more time, but when Robert was off the machine, his eyes were sad. He had had enough- his body couldn’t take anymore. He had no light left in his eyes.

With our hearts broken, we knew we had to let him go. He passed away Christmas Eve 2000. Our hearts broke, and although time has helped, things will never be the same again. We had to do our best for James and our unborn child. We tried and tried. Jake was born 10th April 2001, and everything seemed great. He developed normally. He sat up unaided had a pincher grip, he was cheeky and seemed a lot healthier than Robert had ever been. But then he stopped developing. He started screaming in pain. He started losing skills. How the hell could this be happening again? How could God do this again? I am a Catholic, and my faith has helped, but I was angry with God for a long time. I called one of the doctors at the hospital and she was amazing. She got us a bed there and then so they could do tests. Jake was diagnosed with Leigh’s too at 18 months.

We thought he’d pass away at any minute. I wanted to wrap him in cotton wool at first and just stay inside, away from any germs. But, after a while, we changed our minds and tried to make the most of every day. We have had amazing holidays and days out, been to see loads of shows… we try to pack a whole lifetime into what time we have. He has met John Cena, footballers, Birmingham City fans, saw his team win the Carling cup at Wembley, been to Butlins loads of times, Euro Disney, Florida and Lapland. He has just celebrated his 18th Birthday. Sadly not long after Jake lost his fight to  mitochondrial disease, aged 18 in 2020.

James was diagnosed with Asperger’s along the line, but ‘what the hell- he’s alive’ was our sentiment. My health hasn’t been too good either. I have been diagnosed with Functional Neurological Disorder, or it could be linked to the Leigh’s. We think the Leigh’s came from my Mom’s side. Every one of my Grandad’s brothers and sisters died young- expect for one who passed away with lung cancer. My Mum lived the longest to 56 (woo woo…). My great grandmother was very ill all her life and very weak. Grandad’s brother had seizures and was very weak and his son, we think, had Leigh’s and passed away at 14. Doctors always tell me that it’s too far a family link to have anything to do with the Leigh’s, but science finds out new things all the while.

There has also been a lot of history of miscarriages in the family. I myself think I had 3 early miscarriages- I was 3 weeks late and then bad bleeds- and there is also a strong history of migraine and Asperger’s in the family- My brother and nephew and cousins. Sorry this is so long- I just couldn’t stop once I started writing. I have learnt lots out of our Mitochondrial journey: always have a sense of humour, don’t worry about small stuff and enjoy life as much as you can- yes there are days when you want to cry and scream but lots of days that are great.