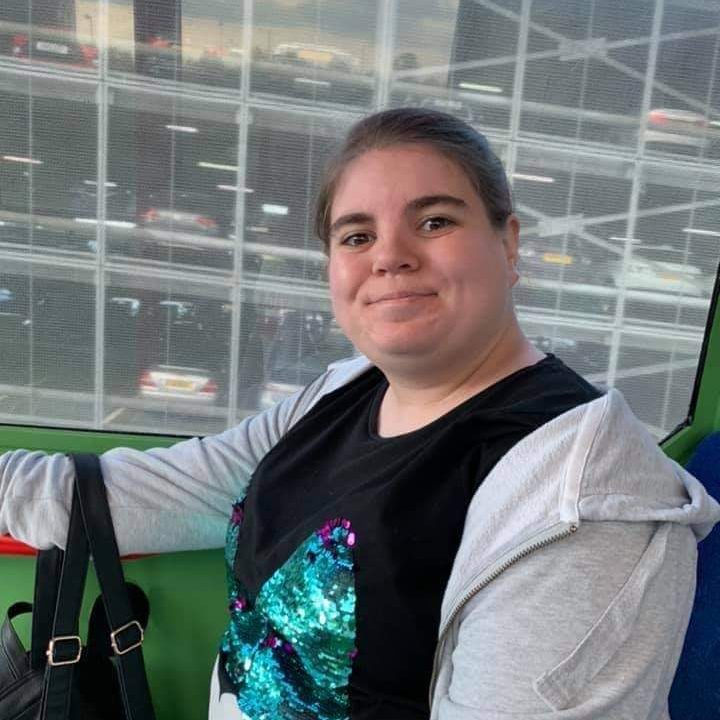 Alex is my first born, I was only 20 years old when I gave birth to her, she was a perfect healthy little (6lb2oz) baby.

We didn’t get off to such a good start though, She was such a little dot and so unhappy as a baby, crying all the time and feeding every 1-2 hours only taking minimal amounts and mostly vomiting that back over the course of the 1-2 hours! We just went around in circles, it was exhausting. Alex didn’t meet many of her milestones on time, she met them eventually but later than everyone else her age.

Alex attended our local child development centre and saw the paediatrician attached to that, who felt Alex would benefit from a brain scan and to see the paediatrician at the hospital due her being unable to speak and being very very hyperactive, we went and had various tests at our local hospital and finally got a diagnosis, well if that’s what you can call it, The consultant saw us for our results on the 5th January 1997, she was very flippant when she delivered the results, she told us Alex’s brain was damaged, it was a part that affects speech and language, coordination and behaviour, she went on to tell us that Alex would never go to university, never get married or have children and never hold an intelligent conversation! Wow!

She then let myself and Gary walk out of that hospital that day with no help or support! To say we were devastated was an understatement.

Anyway fast forward to August/September 2008,We seemed to bumble through life up until then with ups and down but nothing that major if I’m honest, little none specific illnesses here and there (that now make sense), but relatively ok in the grand scheme of things.

So in July 2008 Alex’s grandad had a heart attack and Alex was present at the house when he became unwell and the ambulance arrived (he’s doing well now), following this trauma Alex started to become quite unwell, behaviour changes with some psychotic episodes, also bizarre eye movements and visual disturbances and constant vomiting.

We were worried beyond belief, we didn’t know what was happening to her and neither did she, we had test after test and finally was given the diagnosis in November that Alex had suffered a stroke!! “A stroke” how could this be? She was only 17! Strokes only happen to old people, they don’t happen to 17 year olds and they especially don’t happen to my 17 year old!!

After another brain scan the consultant came to us and told us that Alex’s mitochondrial disease has spread to other parts of her brain, we had heard the word mitochondrial disease a few years ago but Alex had been so well we didn’t concern ourselves with it really and thought possibly the Dr had got it wrong somehow, but no, here it was again that word rearing it’s ugly head, but this time along with a stroke, or what we now know is actually a stroke like episode and not a stroke that old people have, still it’s a stroke all the same.

Things just seemed to be going from bad to worse with Alex’s health, she stopped being able to wee and I had to be taught how to catheterise her, she also couldn’t see properly and had to wear a patch over her glasses because she was seeing two of everything and this was making life difficult.

Her mood was terrible with terrible outbursts of anger which was very unlike Alex. She didn’t smile or laugh, I couldn’t cope with thinking I might never hear that laugh and see that smile again. We had regular visits to the neurologists, and psychologists, she was medicated for her mood, this helped slightly, as for her health the neurologist couldn’t tell us what was happening with that and just said she was going down hill and she wasn’t sure how long we would have her for, our life had come to a standstill and our whole world came crashing down around us, I couldn’t contemplate the future and what it could hold (I still can’t if I’m honest!)

We decided after one of our appointments that we would not let this illness define us and dictate things, we agreed that from that day on we would make every day count and try not to look too far into the future, we would live for today, and think about tomorrow, tomorrow!

If I’m honest I didn’t think Alex would last that year out, here we are now 10 years later, Alex isn’t the same person she was, her health has declined massively, she’s had multiple stroke like episodes although none as bad as 2008, she now suffers from tremors and myoclonic jerks which are draining.

However we are still determined to live life to its fullest and create memories each day.

Alex has been left with multiple lesions on her brain due to the stroke like episodes, we now have a diagnosis of Leigh’s syndrome/disease.

Alex has good days and bad days and the bad seem to be tipping the scales slightly, however, we will fight this disease till the end. Alex has learning difficulties so doesn’t really understand how unwell she is, rightly or wrongly we don’t tell her too much, she can’t process and digest information like everyone else can so we tend to protect her from her diagnosis a little.

Thankyou for reading our story.